Skip to content
Episode 45: Tips To Overcome Fear Of Failure In Business
Apr 21, 2022

Okay. It’s when you do absolutely nothing. And when you’re stuck, where you are, because you’re afraid to do anything. I want you to ask yourself is the threat of failure more scary than inaction and not getting any results? Right, I want you to think about that.

Listen and be inspired! Look for The One Percent Code wherever you listen to podcasts. And if you enjoy listening, don’t forget to subscribe and keep sharing your favorite episodes and key takeaways on social media! (don’t forget to tag Dr. Melva!)
Hi, I'm Dr. Melva you're board certified radiation oncologist, and serial entrepreneur and investor. Welcome to the 1% code podcast. I help top income earners create multiple streams of income to support the career they love or the one they want to love. Again, learn more on the 1% code podcast. Hello.

Hello. Welcome. Welcome. Welcome. I'm your host Dr. Melva Pinn-Bingham board certified radiation, oncology, physician, serial entrepreneur, and investor, and I help physicians and other top income earners create multiple streams of income outside of your primary career. And we do that through strategic leveraged opportunities.

So it's a day we are discussing. Overcoming the fear of failure in business. So this is a topic that comes up a lot and that's one about failure. So as entrepreneurs, it's a concern that like it's not ever really going to go away. It's something that we're going to learn how to deal with, right. The concept of.

Thanks. Just not working out and you failing. Okay. So we hear so much about the success and accomplishments of other entrepreneurs, and it seems like failure, wasn't really part of their story. Or maybe you only catch some people's fear of failure stories. But what you have to understand is that failure is just natural.

It's expected. Right. And I don't necessarily. Refer to it as failure. I refer to it as a learning opportunity, and I'm actually talking about this on one of my upcoming podcast episodes. So if you haven't heard the 1% go podcast, take a listen. And I'm sure you will be in for a treat. So anybody that you ask who has had success, and let's say they've had maybe more success in the direction of where you're going, or they've had success in another field outside of entrepreneurial.

So we're going to talk about a couple things. So one, you want to recognize that there's a certain amount of failure. And that can be a good thing. Okay. Like embracing failure, right. We want to fail fast. We want to fail forward. We want to embrace the concept of failing. So it's not something that stops us in our tracks from taking action.

All right. And you'll learn more. From one failure than a lifetime full of success. And I see this a lot with other entrepreneurs, especially physician entrepreneurs. We may have had some really good things happen and good success in our careers. And then we don't realize until we fall flat on our face, that there's some lessons to be learned.

Right. And a lot of times those failures come when we're putting our own money into it. So it can be a stumbling block because you're kind of afraid to step out there and do it again. But believe me, it is okay to have failures. Okay. So if you're not failing. It probably means you're not doing enough to even know it, to even know what failure is.

Right. So for example, I always like to bring in things from my own life. So in the franchise business, we're multi franchise owners and we're working on a second location of the cold stone Creamery. And so I got a call today. This is another thing like I really learned people are very one kind of one sided, like focused on what it is they need to accomplish.

So for example, the lady from corporate who's over the retail, leasing, et cetera, her only job is to get the leasing location, like the corporate retail location approved. So she's only worried about her paperwork. So she calls me today to see if I've done it and it wasn't on my radar. It wasn't on my list of things that actually need to actually do, because I was working with the leasing agent.

And we were working on that part. So right now we've done the letter of intent. This is for a new stone location and they're doing the least draft. So you do elaborate of intent and then you do a least draft agreement. That's the part that I'm focused on? Well, the lady from corporate who called to ask them to have this other paperwork, it wasn't on my radar because that's not my goal.

I know that I need to finish a, B and C before I go to the next one, but that was her laser focus. So the reason I'm saying this is that once you get into these business opportunities, That probably looked like a fail on my part to her because she's like, well, you haven't done this paperwork and we can't move forward with this until you do this.

And I'm like, well, it wasn't on my radar and I'm not scheduling anything before Thanksgiving. So, you know, give me two weeks, you know, and then I like pulled up the paperwork just cause I had a second and I'm like, I didn't even have all the information to put on this. So. Yeah, let me reach out to the leasing agent and see it was like dimensions and I'm not an architect.

I'm not a designer. I can't do that. So anyway, it's okay to fail and it's okay for some other people to connect. You having a failure because you'll just learn from that. Right. So now I'll know the next time these are the steps and this, these are their expectations. Okay. So that's my example. Number two, is that you can develop your learning process.

Okay. So really the way you learn from failures, you're going to ask yourself a couple questions. So you're going to ask what went wrong. What could I do differently? What did I learn from this experience? Or you can refocus your strategies to create a new plan. So if you're not learning from what happened or these experiences in your business specifically, then it can happen again.

Right? So another example, Coldstone Creamery are franchise owners. There, there was the social media posts that went by. And I told everybody that could get like this free pumpkin pie. I don't know if you got it. I don't know if you went to the whole stone to get it, but the company learned from their mistakes.

Cause that was a failure. It was a failure in business. It hurt business owners because imagine just seeing like pumpkin pie, 0 0, 0 pumpkin, zero pumpkin, zero, all these orders coming in and it was basically a glitch in the system that people on social media exploited, the company had to go through. I've gotten no less than 10 emails in the last 72 hours about this.

And again, we use district manager, so I'm not addressing all the issues, but I'm seeing them, I'm aware of them. So corporate had to learn from this failure in their pricing. And when promotions went out and worked with a third party, they had to do damage control with PR letters, you know, for people who had problems, but they still carried on and they didn't change any of the requirements for franchise owners.

They didn't credit anyone back. They acknowledge the failure. They did the damage control for the failure and they learned from those mistakes and in the last set of emails that went out were things they learned and what strategies and systems would change. So this wouldn't happen in the future. And then they ran more detailed reports to make sure they weren't missing anyone.

So think about that, compare yourself. And I always like to compare myself to industry or corporate, if they're not afraid of failure. Why am I, I want you to ask yourself that, why am I okay. And the next thing is that you anticipate your potential challenges, right? So the fear of failure. It's because of this element of uncertainty and this lack of control.

But when you take some time to think and forward think and plan about, you know, like what are the roadblocks that can happen, then you have less uncertainty. Because like, for example, if I'm prepared, like as a business owner, I was prepared to get complaints about this pumpkin pie that people want it for.

We got like one or two, it wasn't terrible. It wasn't terrible. And one lady said, oh, she came all the way there to get these pies. And no one, let her know something I'm going, you know, I was thinking like Cohen, you know, the bumpkin that was the $0. Like what promo is that? Where we just have like a free pumpkin pie day in the middle of November before Thanksgiving.

It's not, but anyway, we were prepared for that. I knew the roadblocks, we had our emails set up to go out. We had a manager in place for responses, so it was less. Overwhelm less elements of uncertainty, less fear of the failure or perceived failure because we anticipated the potential challenges. And next is overcoming perfectionism.

When you lower your expectations and you give yourself some breathing room to be realistic, and you're forgiving as possible with your success metrics and break down your goals into smaller, more manageable parts, then you can stay on top and on track. Of things that are on your plate right away. So that you're not doing so much that if it's not perfect, And if there's failure that it would cause you these fears, or it would be something to stop you, like at the end of the day, this is all about things that can just stop you from moving forward.

Okay. And the last one that I will quote today, or just share with you is that an imperfect action is better than a perfect inaction, right? So do you know, it's so much scarier than failure. It's doing nothing. Okay. Because when you do absolutely nothing and when you're stuck, where you are, because you're afraid to do anything, I want you to ask yourself is the threat of failure, more scary than inaction and not getting any results.

Right. I want you to think about that. And that's the big takeaway from today. Go out there. You can do this. Absolutely. Do not. Let failure stop you from moving forward in your business. Take these tips that we've shared today, put them in action and share with me below how this has helped you move forward in your business.
Are you a busy physician looking to build additional income streams?
Get my 9 Business Ideas for Busy Physicians here —> www.melvasfreeoffer.com 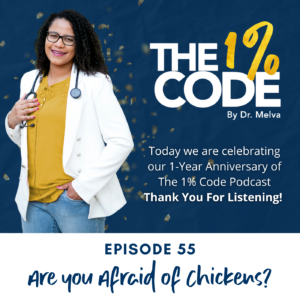 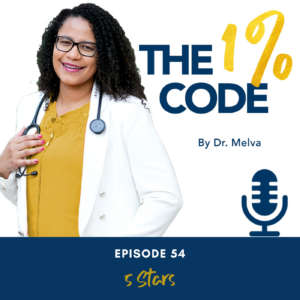 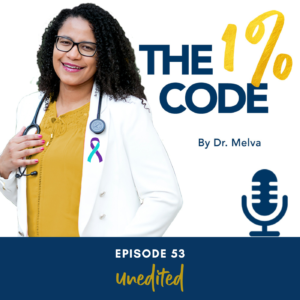 PrevPreviousEpisode 44: Now Trending
NextEpisode 46: How To Get Unstuck In Your BusinessNext